Rediscovering Inner Peace. A Gift From My Father.     While cleaning out my house the other day, I stumbled across something that triggered a deep-seated fond memory of my father.  When I was a young teenager he and I had a special father-daughter trip to an indoor flea market on Sundays in Toronto. On one particular day, I stopped in front of a booth selling imports. Their table was full of Baoding Iron Balls, otherwise known as Chinese Stress and Relaxation Balls. I was captivated by all the colors. Dad looked at the huge array of display boxes at the booth and picked one out for me with enthusiasm and said “This is one of our new therapies”.  He was always interested in world cultures, unconventional therapies, health, and fitness. His slight obsession made an imprint on me and had some influence on my own health and fitness obsession; eventually leading me into the field of chiropractic and natural medicine. (He actually introduced me to his chiropractor who later became my mentor.) 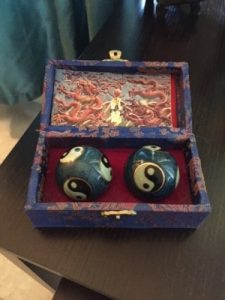 Baoding Balls are held in one hand and rotated in both directions alternately while extending and flexing each finger in sequence.  I dug the insert out from inside the box cover and read what I was too disconnected to read back in those teenage years.  Also known as the Healthy Ball, it dates back to the Northern- Song Dynasty (960 -1127 A.D.) in Baoding City, China when it was used in Buddhism martial arts. During the Ming Dynasty (1368-1644 A.D.) the Emperor claimed it as a Palace treasure but later it expanded to the entire people, to “improve physical conditions and mold temperament.” In the martial arts circles, it was acknowledged as a “matchless medical healthy treasure.” As they move, you hear a two-toned soothing sound: The Roaring Dragon and Singing Phoenix (The Yin and Yang- two opposing principles).  Originally, I didn’t know what they were called.  I didn’t read the insert. I just used them to work on coordination; similar to juggling balls in one hand. I just thought the sounds were cool and I enjoyed the challenge of speed rotating them in my hand without dropping them. Well, it was still therapy – brain-hand coordination!

A simple apparatus that in Ancient Chinese traditional medicine, will “circulate your blood, relax your muscles, rest your five internal organs and prolong your life” – The five organs being Liver, Heart, Kidney, Spleen, and Stomach. At the same time, this simple therapy benefits the brain, improves memory relieves fatigue, and “down the worries” (as translated in the insert).  As a chiropractor, I can see how they relieve stiffness in arthritic joints in the hands.

Over the many years of moving around, I have saved this little blue box while other items were tossed for donation or disposal.  I wasn’t using them at the time but somehow I couldn’t give them up. And now I found them for the last time when they are most needed.  My daily ritual of mindfulness and gratitude now includes Baoding Ball therapy during meditation. I certainly feel the peace and reduced anxiety. The other benefits would be silent ones, however, I believe every healthy practice improves health on a cellular level beyond our conscious awareness.  Health should never be based solely on the absence of symptoms.

So now I hold in my hands daily, a treasure in more than one form, a symbol of his legacy.  The sounds of the Baoding somehow keep me connected to his spirit and ground me, uplift me, comfort me; much like he did when he was here.

A father, like a mother, should be celebrated every day.  A special thank you to all the fathers who provide, protect, encourage and inspire; including those who have left but still live in our hearts.

(Baoding balls can be purchased online and come in a range of craftsmanship levels and prices. Visit my Shop page under therapy and supplies if you are interested in Baoding therapy.)

We use cookies on our website to give you the most relevant experience by remembering your preferences and repeat visits. By clicking “Accept All”, you consent to the use of ALL the cookies. However, you may visit "Cookie Settings" to provide a controlled consent.
Cookie SettingsAccept All
Manage consent

This website uses cookies to improve your experience while you navigate through the website. Out of these, the cookies that are categorized as necessary are stored on your browser as they are essential for the working of basic functionalities of the website. We also use third-party cookies that help us analyze and understand how you use this website. These cookies will be stored in your browser only with your consent. You also have the option to opt-out of these cookies. But opting out of some of these cookies may affect your browsing experience.
Necessary Always Enabled
Necessary cookies are absolutely essential for the website to function properly. These cookies ensure basic functionalities and security features of the website, anonymously.
Functional
Functional cookies help to perform certain functionalities like sharing the content of the website on social media platforms, collect feedbacks, and other third-party features.
Performance
Performance cookies are used to understand and analyze the key performance indexes of the website which helps in delivering a better user experience for the visitors.
Analytics
Analytical cookies are used to understand how visitors interact with the website. These cookies help provide information on metrics the number of visitors, bounce rate, traffic source, etc.
Advertisement
Advertisement cookies are used to provide visitors with relevant ads and marketing campaigns. These cookies track visitors across websites and collect information to provide customized ads.
Others
Other uncategorized cookies are those that are being analyzed and have not been classified into a category as yet.
SAVE & ACCEPT